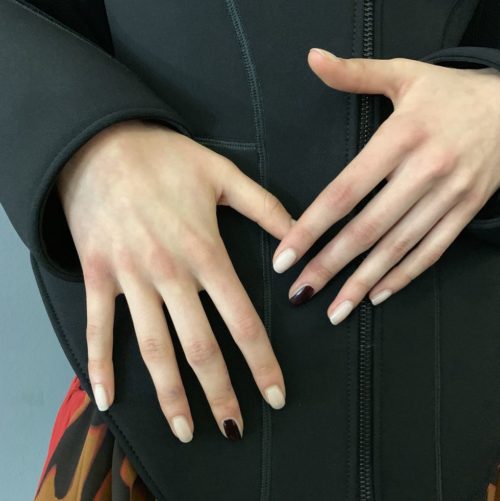 collection. Following that of an Italian mani style where the sides of the nail are left natural with a strip of nail polish down the middle, Newman took the style to the next level with an unapologetic ’80s twist. The colour used for the models’ middle fingers is called Scandal, and her humorous thinking behind it is that it’s a way for the models to show the audience the middle finger without them realising it. Sneaky with an underlying hint of rebellion

Maison Margiela’s Lack of Theatrics
Margiela, the fashion house known for its theatrics and sensory transitioning shows, displayed a contrasting lack thereof at their A/W show in Paris earlier this week. As viewers, we’re familiar with the exaggerated runway displays that tip the heads of audience immediately but this time around, John Galliano opted for utility, functionality and overall simplicity. A rather refreshing addition to the fashion week line up but one that has us thinking if the quintessential Margiela prerequisites are slowing dying down? / IMAXTREE

Dior’s Makeup Nod to The 60s
The models at the Christian Dior show strutted down the runway in a textural mix involving tartan, tule and the like but it was the makeup look that had us fascinated. With a deliberate reference of the 60s, models walked with fresh faced skin and dramatic eye makeup that paid homage to ’60s icon, Twiggy and the mod aesthetic of the same era. The lids were painted in black which created a deep-set effect with striking eyelashes drawn in the form of black lines. Quite the statement but definitely a look that suited the edginess of the collection’s aesthetic. / GETTY IMAGES