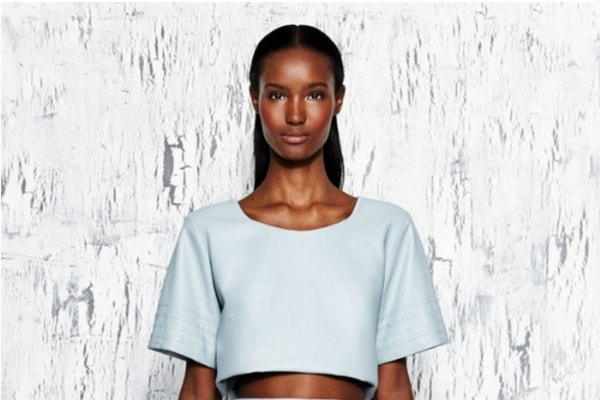 list of the 8 top African models that have successfully broken the stereotypes and making the continent proud.

Siad is a Somali-Ethiopian fashion model currently based in New York is definitely one of the top African models. Siad came third in America’s Next Top Model’s Cycle 10.

She has featured in numerous fashion magazines, including Elle, Cosmopolitan, Essence Magazine, and Marie Claire. Siad secured a print campaign for Ralph Lauren in 2014, along with a campaign for hair care brand Pantene. That same year she walked the runway at London Fashion Week Fall/Winter for Emilia Wickstead and Lucas Nascimento and has earned her spot on this list of top African models.

Aamito Lagum is a Ugandan model who rose to fame after winning the first season of ‘Africa’s Next Top Model’ hosted by Nigerian supermodel Oluchi Orlandi.

Lagum’s mother wanted her to be lawyer, but her passion for modeling fuelled her to take a 16 hour bus ride from Uganda to Kenya to attend the East Africa casting for the reality TV show. Since winning the competition, and a contract with DNA Model Management, the 23-year-old has done editorial work for publications such as WSJ Magazine and Elle South Africa. Laugh has also walked the runway for international fashion designers such as Paul Smith, Marc by Marc Jacobs and Lacoste.

Some of her goals include working with Vogue editors Anna Wintour and Franca Sozzani.

The South African was spotted by a talent scout at a flea market in Durban at the age of 15. A year later, she started booking modeling jobs across Europe until she made the big move to New York City at 18 to pursue it as a full time career.

Swanepoel is one of the most recognizable Victoria’s Secret models, having made her debut in 2007. She has graced the covers of countless magazines including Nylon, Elle and Vogue and has walked the runway for notable designers such as Diane Von Furstenberg, Nanette Lepore and Betsy Johnson. She is currently signed to IMG and is another worthy mention in this list of African models.

Agbani Darego is a Nigerian model who once won the title of ‘Most Beautiful Girl in Nigeria’. That led her to represent Nigeria at Miss Universe 2001. She finished 7th in the competition, and went on to compete in Miss World 2001, and became the first native Sub-Saharan African to win the title after South Africans Penelope Anne Coelen in 1958 and Anneline Kriel in 1974.

Since then, she’s done notable work such as landing an endorsement with L’Oreal which ended in 2005, walking the runway for designers such as Oscar De La Renta, Marc Bouwer and Tommy Hilfiger and gracing the covers of magazines such as Elle, Marie Claire and Cosmopolitan. Darego has a degree in Psychology from New York University, has her own clothing brand called AD by Agbani Darego, and is the brand ambassador for two of Nigeria’s leading brands; Arik Air and Nature’s Gentle Touch.

In 2010, Agbani made it Vanguard’s list of the 20 most influential Nigerians. She and fellow model Oluchi Orlandi are considered the pioneers of modeling in Nigeria, having both having being the first Nigerian models to have successful international careers. Ataui Deng is a 23-year-old Sudanese-American model who is also the niece of world renowned Sudanese model Alek Wek.

Leila Lopes is an Angolan model who made history as the first woman from Angola to win the Miss Universe crown in 2011, and only the second African woman to win the title after Botswana’s Mpule Kwelagobe, who won in 1999.

Lopes was born in Benguela province in South Angola, and is the eldest daughter of seven children. She has been involved in HIV/AIDS prevention campaigns in Angola, and has been the Drylands Ambassador to the United Nation Convention to Combat Desertification (UNCCD) to combat land degradation. She has also graced the covers of numerous magazines such as Maxim and New African Woman Magazine, and walked the runway of New York Fashion Week in 2012. She is currently signed to Trump Management and is married to Nigerian-American footballer Osi Umenyiora

Behati Prinsloo is a 26-year-old model who hails from Grootfontein, Namibia. She was discovered at the age of 16 while on holiday in Cape Town by scouter Noelle Doukas, daughter of Sarah Doukas who is famously known for discovering supermodel Kate Moss.

Behati shot to supermodel stardom in 2009 when she was named as a Victoria’s Secret Angel, and became the face of their ‘Pink’ brand. She walked the runway for top fashion design houses including Chanel and Louis Vuitton, and has graced the covers of high profile magazines such as Elle and Vogue.

Prinsloo married Maroon 5’s Adam Levine in July 2014 in Cabo San Lucas, Mexico. They celebrated their first wedding anniversary in the same city, where Adam serenaded her with a rendition of Marvin Gaye’s ‘Let’s Get It On