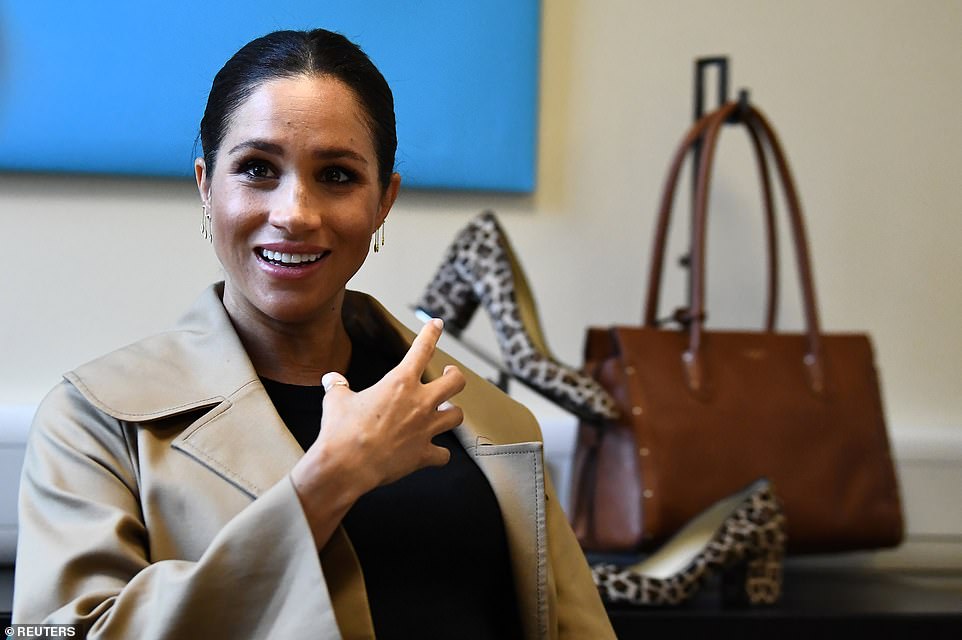 Meghan Markle shows how to dress to impress, becomes patron of charity

Meghan shows how to dress to impress! Duchess gives fashion tips as she becomes patron of charity helping women get back to work – while wearing a £2,600 coat and a £1,700 handbag

The Duchess of Sussex today helped give fashion tips to women at a charity helping the long-term unemployed and vulnerable – one of her four new patronages announced today – and declared: ‘I’m so happy to be here.’

The former actress, who is expecting her first child in the spring, wore a £2,600 coat by Oscar de la Renta, a £179 dress from maternity label Hatch and £315 Kimai earrings as she helped employment hopefuls choose an outfit.

The Duchess – who also wore a Victoria Beckham Vanity Box leather tote bag worth £1,695 and Giovanni Rossi PVC pumps believed to cost about £500 – has privately visited Smart Works several times over the last year and worked with some of the women who have benefited from the charity’s support, Kensington Palace revealed.

She told the group, which included two former clients: ‘I’m so happy to be here. You guys know I’ve been quietly coming by… close to a year. It’s nice to be able to now do it publicly and really talk about the work that you do.’

Kensington Palace announced today that Meghan has also taken on honorary roles with the National Theatre and Association of Commonwealth Universities – patronages both previously held by the Queen.

The Queen has been patron of the National Theatre for 45 years and the ACU for 33 years. The Duchess will also be patron of Mayhew, an animal charity based in Kensal Green, North West London.

The duchess picked out a black handbag and tan cape for Patsy Wardally, who got a customer-facing role at London Gatwick Airport after being helped by Smart Works.

‘Green seems to be the colour,’ she joked, prompting laughter from the room as she complimented the 55-year-old on her green coat.

Meghan then picked her out a tan cape and a black shoulder bag to go with a red and white patterned dress. She left the centre after 50 minutes. Mrs Wardally said she felt ‘exhilarated’ to have met the duchess.

She was dressed in a red and white dress while Meghan picked out a camel cape from Hobbs, a black bead bracelet tied with ribbon, which the duchess called ‘quirky’, some simple pearl earrings and a black handbag.

Asked how she felt in the new outfit, she said: ‘More confident, more beautiful, I looked in the mirror and I know it’s me, but the difference in my esteem and everything has just shot through the roof.’