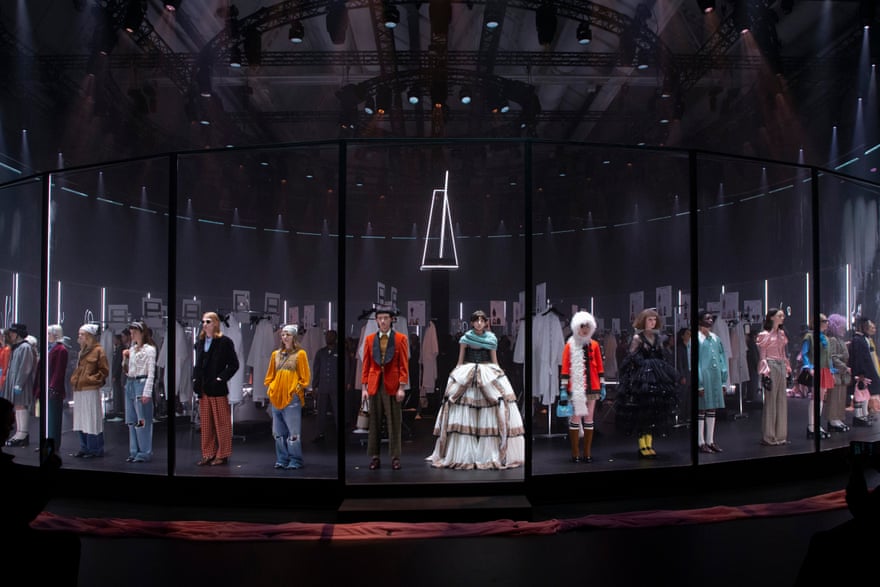 Alessandro Michele showed a 360-degree view in a fully immersive show including the backstage area of rails of clothes and dressers now centre-stage. Michele explained post-show that there is more to a fashion show than just the clothes. ‘You were our show, and we were your show, both seeing how the other works,’ he said, explaining that this was his first reciprocal show. Michele drew on childhood – the perfection and freedom of children’s clothes – and translating this to looks such as a pinafore worn over a lace shirt, or a pleated dress with a neat lace collar.
Photograph: Dan & Corina Lecca/Gucci

Bottega Veneta Daniel Lee’s first show since he swept the board at the Fashion Awards in December was the ticket of the week. All eyes were on the shoes: after launching a monster boot trend, he continued what is sure to be his winning streak with cuban-heeled cowboy boots. Bags, for which the brand is famous for, came in oversized intrecciato and pocket-sized clutches. Texture – via tassels and embroidery elevated straight-line silhouettes, while chartreuse, scarlet and yolk-yellow made the palette pop. Elsewhere Lee was in a razzle-dazzle mood. Jeans came in all-over diamanté, as did inverted dresses and tight tailored trousers. Let’s call it sequins by day – the Bottega Veneta way. Photograph: Daniel Dal Zennaro/EPA

Versace How do you match everyone on their feet staring at J-Lo closing the show? You make them look at themselves. Guests were sat in front of a screen with their real-time image staring back at them, before it morphed to contort their image. What started as humorous became unsettling (as surely intended by Donatella). Versace went large on high-heel Wellington boots; spliced, sewn and patchworked denim; razor-cut leather dresses; a heritage line of Prince of Wales houndstooth in tailoring that featured exaggerated shoulders and hips; and shrunken puffer jackets. Photograph: Victor Boyko/Getty Images

Emporio Armani Giorgio Armani opened on a section titled: ‘I’m saying yes to recycling.’ Next came a collection that hung in the balance between masculine and feminine, with long flowing jackets alongside high buttoned blazers worn with wide-legged trousers. The hero was the white shirt worn with a cravat or jabot around the neck. Masculine houndstooth and check took a softer path when lace and draped velvet were added, and delicate ruffles lightened the mood. The collection was predominantly graphic monochrome with a light dusting of three shades of green, from forest to jade Photograph: Andreas Solaro/AFP via Getty Images

Etro The collection had South American influences, Argentinian Gaucho style hats and fringe detailing. The show stealers were the knitted coats that were extraordinary, lavish weaves and prints. A shearling coat had folk-like embroidery, and multi-textural, appliquéd, and fringed knits were wrapped aroundsignature paisley-printed ruffly, floaty dresses that were scattered throughout. The evening wear varied from velvet jackets to a gold brocade smoking jacket and beautifully embroidered and embellished tops and dresses.

No.21 This was Alessandro Dell’Acqua 10th anniversary at his label No.21. The show was full of Dell’Acqua’s signature style, a touch of the very cool and slightly rebellious bourgeois girl, mixed with the play on masculine and feminine – a mannish style shirt worn as a dress, as it offered up super sexy V-neck jumpers tucked into pencil skirts worn with a chunky ankle chain stiletto. The chunky chain also decorated impeccably tailored coats, or held an asymmetrical draped skirt in place and gave a punkish note to the collection,

Tod’s Newly appointed creative director Walter Chiapponi has a lot to congratulate himself on with this collection. Reworked classics felt fresh, referencing everything on Italian style from furniture design to architecture. The clothes were refined and the shapes adapted to transform the fit. The show opened with jumbo cord trousers, masculine shirts layered under a blazer or worn with crochet knitwear.

Jil Sander There is a purity and minimal elegance to Lucie and Luke Meier’s vision for Jil Sander. This was reflected by the stage set, simple wooden chairs arranged in a rectangle in the centre of the runway. Models walked the perimeter and then took a seat. The colour palette ranged from midnight blue and black to powdery white to pastel tones, the fabrication was luxe and refined. The silhouettes saw voluminous, floaty, silk jacquard dresses worn with cashmere capes, tailoring was cut with a masculine touch and contoured with a feminine waist

Fendi Exploring ‘soft power’, this collection felt new and modern and ladylike with a diverse cast of models. Greys, neutrals, pastels and Fendi’s signature yellow were offered up in cashmere, leather and lace. Officers’ coats and blazers felt contemporary when detailed with a boned bodice curved around the back finished with shoulders that planed to a flat point or drop into a Juliet sleeve. Playful, voluptuous shaped skirts were worn with cosy knits, bibbed blouses,

Max Mara Backstage creative director Ian Griffiths summed up the collection, saying: ‘Max Mara is king of the coat, this season I wanted to develop as many coat shapes as possible.’ Featuring great coats, capes, cabanas, and duffles, some with a ruffle sleeve, others with a drop shoulder and gathered sleeve head to create volume, and some worn with skirts with hemlines that dip dramatically on one side. Griffiths looked to an icy northern seascape for inspiration; maritime-themed detailing appeared as rope belts to cinch dresses and duffles with toggles and tassels. Photograph: PR

Prada The view from a balcony overlooking a busy Piazza was the set for Miuccia Prada’s fall show. Opening with 1940s inspired tailoring, cinched at the waist with utilitarian belts worn with deconstructed pleated skirts, spliced to reveal the leg, Prada’s constant play on the strength of masculine tailoring with feminine touches was ever-present. The feminine fairy dust was scattered as fringing found tracing the arms on coats and dresses and swaying as details on knitwear. The strength came in shirt and tie looks and sleeveless patent leather coats. Photograph: Alberto Moncada/Prada