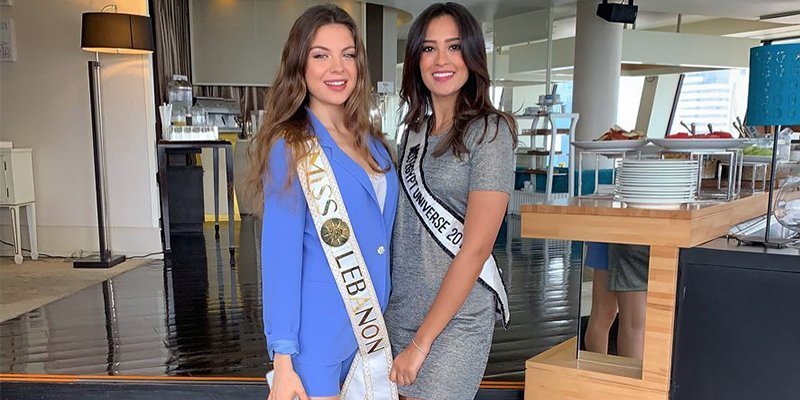 Miss Lebanon and Miss Egypt are representing the Middle East
Out of 93 contestants, Miss ­Lebanon, Maya Reaidy, and Miss Egypt, Nariman Khaled, will be the only Arabs competing in the 67th edition of Miss Universe, which will be held in Bangkok, Thailand, on December 16.The pageant this year will have the highest number of contestants ever, breaking last year’s record of 92 participants. The show will be hosted by American comedian Steve Harvey for the fourth consecutive time, and he will be accompanied by supermodel Ashley Graham.

Lebanese contestant, Maya, is studying Pharmacy at the Lebanese American University, and studied psychology prior to that. She is fluent in four languages: English, Arabic, French, and Russian. The 23-year-old is passionate about traveling and seeing the world as it helps her understand other cultures and meet new people.

If Maya wins the crown, she aims to use her title to support women in the region, and would attempt to take on several social issues, such as: sexual harassment and education. She also wants to raise awareness of the special needs community in the Middle East.

Ever since getting into Miss Universe 2018, Maya has been sharing her journey of Thailand on Instagram.

This year will host the highest ever number of contestants, and in turn countries, taking part – surpassing the record 92 participants last year. In 1971, Lebanese contestant ­Georgina Rizk was crowned as Miss Universe, making her the Middle East’s first and only winner.

The winner of the Miss Universe 2018 crown is set to receive an impressive one year contract with Miss Universe Organization,, which includes a salary, a luxurious apartment in New York City, including living expenses, and invite to coveted events like fashion shows, movie premieres, and opening galas throughout New York, extensive travel representing sponsors and charitable partners, a New York Film Academy scholarship, and a modeling portfolio with WME IMG among other benefits.

Miss Universe 2018 will be crowned by South Africa’s Demi-Leigh Nel-Peters, and will receive an impressive prize package which includes a year-long salary as Miss Universe; luxury accommodation in a New York City apartment for the duration of her reign – including living expenses; a one-year supply of beauty products; a full shoe wardrobe from Chinese Laundry shoes and ­accessories; a modelling portfolio by leading fashion photographers; skin and healthcare products; extensive ­travel representing sponsors and charitable partners; access to various events including ­casting ­opportunities, movie ­premiers, screenings, ­Broadway shows and launch parties; and a personal ­appearance wardrobe and styling by the official Miss Universe Organisation ­fashion stylist.